Advancing teams from each League (36 total from 4 Leagues), League rankings, and Match scores are now posted:
http://www.sdftc.org/league-tournaments.html
​
This note explains which teams will qualify, at the conclusion of the 2/4 and 2/5 League Tournaments, to advance to the 2/25 Regional Championships.  The advancing teams will be announced at the conclusion of each League Tournament.

ADVANCEMENT CRITERIA
From each League Tournament (Euclid, Gauss, Turing, and Descartes, nine (9) teams will advance to the Regional Tournament on 2/25.  The Advancement will follow 4.8.2 of the user manual advancement guidelines, set forth below.

We have crossed out the advancement positions that do not pertain to our tournament and highlighted in yellow the teams that WILL DEFINITELY advance.  Category 1 does not advance because League Tournament host teams are not guaranteed to advance.  Categories 7 and 13 do not advance because the alliances in the elimination rounds will have only 2 teams, not 3 teams, because the tournament has fewer than 21 teams competing.

Of course, teams falling into categories 12 and below MAY POSSIBLY advance.  The way that happens is that often there is duplication among the teams in categories 1 through 11.  For example, the Inspire Award Winner may also be the Winning Alliance Captain.  If there is one such duplication, the next team on the list (category 12, Rockwell Collins Innovate Award Winner) will advance.  If there are two such duplications, then category 14 (PTC Design Award winner) will also advance.  And so on, until there are a total of 9 advancing teams. 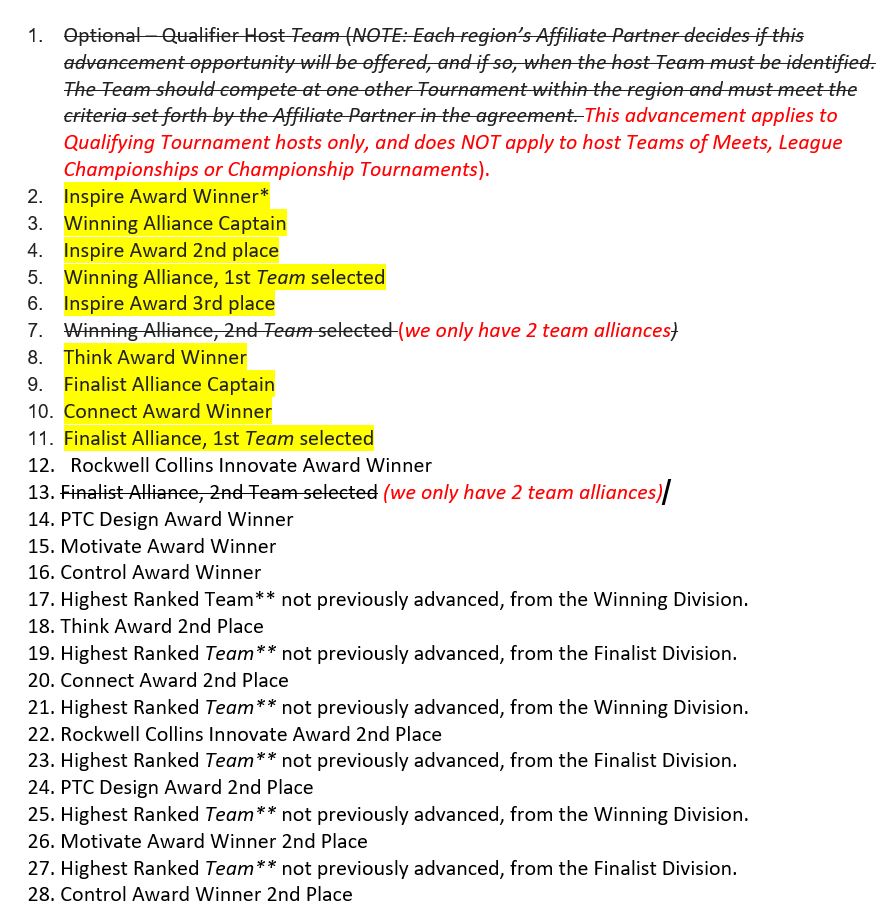 Teams are ranked within each League by their top 10 matches' QP and RP (remember that RP do not include penalty points).

​Here are just a few reminders about how league play works: